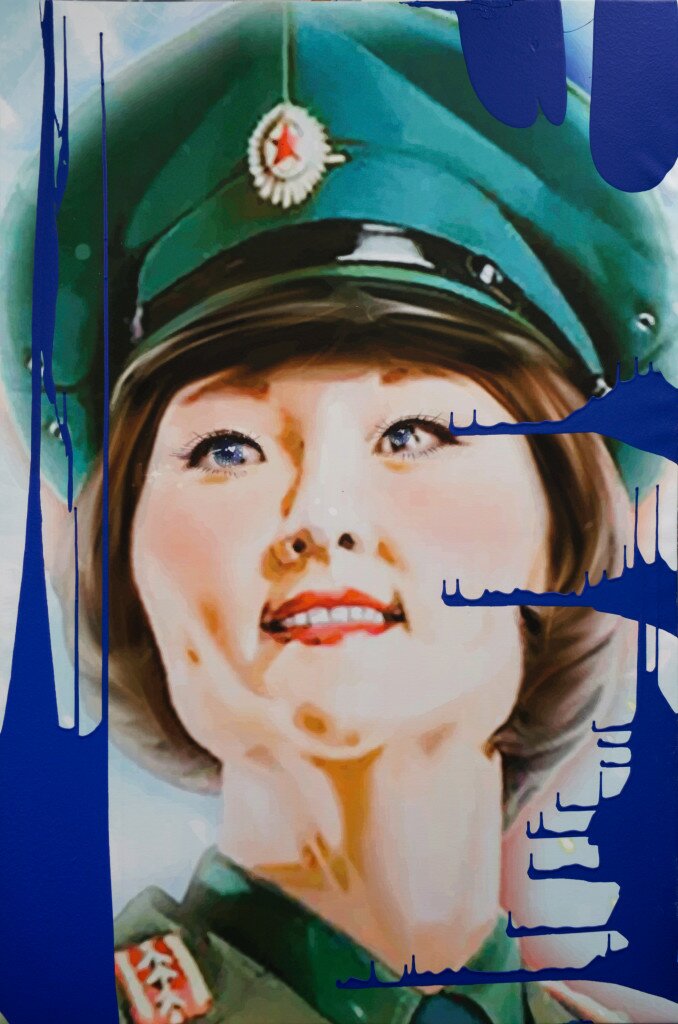 The exhibition takes place during a time when there has been a war of words between North Korean and U.S. leaders. With this exhibition, Cheon establishes the personality cult of UMMA (‘mommy’ in Korean), whose maternal love is deployed as the only acceptable solution for global peace and Korean unification. Whereas South Korea’s modernity was pushed forward by
a chima baram (skirt wind), UMMA’s matriarchal strength is offered as a catalyst for developing
North Korea. In this exhibition, Cheon (in the guise of her alter ego Kilm Il Soon, the ‘Umma of
Unification’) sends motherly love and education to her children in the Hermit Kingdom and the USA.
In addition, she debuts artworks resulting from a series of dissident dreams.

For UMMA : MASS GAMES, Cheon has worked with underground networks to send hundreds of
USB drives containing performance lectures on contemporary art history into North Korea –
arguably the first such artistic ‘re-programming’ engagement with the nation to date. All ten lessons
will be on display at Ethan Cohen Gallery on Notel media players (devices commonly used in North
Korea for watching foreign video content, such as K-pop, drama, and Korean Wave Cinema). The
Art History Lessons by Professor Kim (2017) endeavor to be relatable for North Korean and
American audiences – borrowing from children’s TV show formats while showcasing today’s
contemporary artists and critical perspectives. Carrying the vital messages “The world loves you,
North Korea” and “Both art and lives matter,” lesson topics include Art & Life; Art & Food; Art,
Money & Power; Abstract Art & Dreams; Feminism, Are We Equal?; Art, Lives Matter & Social
Justice; Remix & Appropriation Art; Art & Technology; Art & Silence; and Art & Environment.
The Mass Games (Arirang) are the paramount North Korean spectacle, deployed for nationalistic
propaganda purposes and presented to the world. But are they any fun? In this exhibition, Umma

supervises her own games, convened by love for her children: The show includes group-
performance imagery in the form of Happy North Korean Children (2014) prints. Furthermore, an

installation entitled Happy Land Games (2017), incorporating oversized wooden versions of the
toys normally given away inside packets of South Korean Choco·Pie candy – depicting fairground
rides from a mythical park called Happy Land. The Choco·Pie is the most desired smuggled
confectionary in North Korea, a single pie trading (on the black market) for the equivalent of three
bowls of rice. Visitors to Ethan Cohen Gallery are invited to assemble and play with Umma’s Happy
Land. The themes of games, happiness, and imaginary society in these works are in dialogue with
North Korea’s international self-presentation – invoking the DPRK’s 2011 Global Index of
Happiness Research claim that it is ‘the second happiest nation in the world next to Big China.’

This exhibition also showcases an insight into Socialist Realist painter Kim Il Soon’s cosmopolitan
subconscious. It is only in her dreams that she truly contemplates liberation. These dreams have
resulted in two painting series (entitled, respectively, Hot Pink Drip and Yves Klein Blue Dip),
which incorporate digital manipulation and abstract painterly gestures in conjunction with realist
propaganda styles. Titles and topics include: Umma, Unicorn, and Unification, as well as a series
of Professor Kim and Umma in her full virtuoso presentation rising above the clouds and fogs of the
Baekdusan Mountain, in Umma Rises: Towards Global Peace. Other works include portraits of
Umma in North Korea, Missiles Good Bye and Hello Brave New World.
In UMMA : MASS GAMES, the contradictions, fractures and paradoxes of the Korean imaginary
are on full display. With the Kim Il Soon artist-complex (a locus of various attributes:
scholar/educator, state-artist, dissident dreamer and mother/umma), Cheon explores overlapping
political and personal dramas of identification and acceptance. Simultaneously, she exorcizes
Fatherly sins through the cult of the great UMMA, her motherly love, and her serious play. No image
of this love is too grand. Nothing too small: Leading up to the opening of her exhibition during NYC
Asia Contemporary Art Week, Umma (dressed in traditional Korean garb and on her knees) will
perform the cleaning of gallery floors and offering kimchi. On Friday, October 13th (5PM), she will
be cleaning the floors of Ethan Cohen Gallery as a prequel performance to the UMMA exhibit.
The exhibition catalog will include a curatorial essay by Nadim Samman, who contributed
ideological engineering and ‘right-thinking,’ staging the provocation of the exhibition from the
heavens to the undergrounds of North Korea, where Umma rises and descends. Other writers
include fellow-traveler philosopher Laurence A. Rickels who has taken down the Official
Psychoanalytic History of Umma and Korea, by interpreting Kim Il Soon’s dreams, unlocking her
“andere Schauplatz” where she unleashes a desire for Unification.
“From Kim Il Soon to Professor Kim (whose scholastic pursuits are wide and unbound), our UMMA
demonstrates militant efficiency; outstanding and seasoned ability of leadership; a thoroughgoing and
indomitable spirit; the power of keen observation; clear analysis and extraordinary perspicacity with
regard to all things and phenomena. UMMA’s love for the people is allied with a serious faculty for
creative thinking, regarding every problem with an innovative eye. She shows courage and ambition
while advancing vigorously along the road. She holds fast to the banner with a firm grasp;
with strength, daring, energy and originality. Of course, it is my distinct honor to join with her program
– and to offer my dedicated enthusiasm for proper implementation.” (Curator Nadim Samman)
Mina Cheon (PhD, MFA) is a Korean-American global new media artist, scholar, and educator who
divides her time between Korea and the United States. Cheon has exhibited her political pop art
known as “Polipop” internationally and draws inspiration from global media and popular culture to
produce work that intersects politics and pop art in subversive and provocative ways. In particular,
Cheon has worked on North Korean awareness and global peace projects since 2004 and
appeared to the world as a North Korean artist KIM IL SOON since 2013. While she creates work
that range in medium from new media, video, installation, performance, and public projects to
traditional media of painting and sculptures, the content of the work is in historic alignment to
appropriation art and global activism art. She has exhibited her work and/or in the collection of the
Sungkok Art Museum, Seoul Olympic Museum, American University Museum, Smith College
Museum of Art, Baltimore Museum of Art, Maryland Art Place, Insa Art Space Korean Arts Council,
C.Grimaldis Gallery, Lance Fung Gallery, Trunk Gallery, and represented by Ethan Cohen Gallery.
She is also currently a Full-time Professor at the Maryland Institute College of Art (MICA).
http://www.minacheon.com

Nadim Samman is a curator and art historian whose PhD research focused on underground Soviet
conceptualism. In 2017, he was Co-Curator of the 1st Antarctic Biennale (the first artistic festival in
the world’s southernmost continent). In 2016, he was Curator of the 5th Moscow International
Biennale for Young Art. In 2015, he curated the Cycle Art & Music Festival in Reykjavik, Iceland, and
in 2012, he Co-curated 4th Marrakech Biennale. Samman is currently engaged as a Curator of the
Aurora public art festival in Dallas (2018). He has published in newspapers, magazines, and journals
worldwide, and in 2016 was named among the ‘20 Most Influential Young Curators in Europe’ by
Artsy. http://nadimsamman.com
The Ethan Cohen Gallery was founded in 1987 as Art Waves/Ethan Cohen in SoHo, New York
City. A groundbreaker in the field of contemporary Chinese art, it was the first gallery to present the
Chinese Avant Garde of the 80s to the United States. It introduced the works of now celebrated
artists, such as Ai Weiwei, Xu Bing, Gu Wenda, Wang Keping and Qiu Zhijie. Ethan Cohen today
represents a diverse global mix of art, including contemporary American, African, Iranian, Chinese,
Korean, Japanese, Russian, Pakistani and Thai, with a continuing focus on emerging as well as
established artists, and has two locations, gallery in Chelsea and The Kube in Beacon, New York.
https://www.ecfa.com