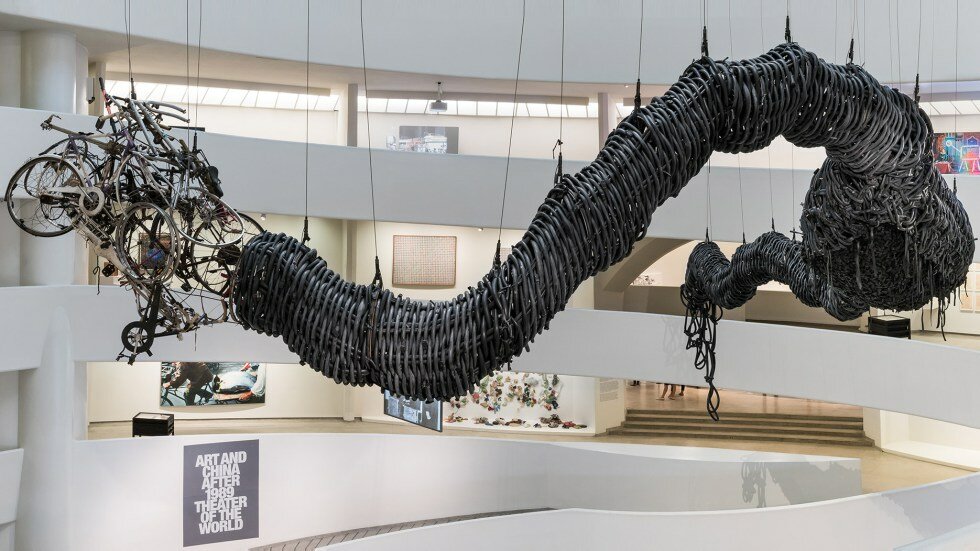 The Guggenheim Museum’s exhibition, Art and China after 1989, presents work by 71 key artists and groups who have been active in China and around the globe.

Starting in 1989 and spanning through the Beijing Olympics of 2008, the exhibition covers the culture of artistic experimentation during a time characterized by the onset of globalization and the rise of a newly powerful China on the world stage. The exhibition’s subtitle, Theater of the World, comes from an installation by the Xiamen-born, Paris-based artist Huang Yong Ping: a cage-like structure with live reptiles and insects caught in the cycle of life, an apt spectacle of globalization’s symbiosis and raw contest.

Art and China after 1989 is organized into six chronological, thematic sections throughout the rotunda and two other floors of the museum. Despite the diversity of the exhibition, the artists have tried to go beyond China’s political disagreements and simple East-West dogmas. Their creativity expands ever-widening view of contemporary art and inspire new thinking at a moment when the questions they have faced—of identity, equality, ideology, and control—have pressing relevance.